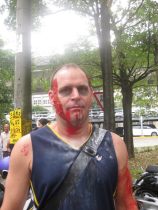 The Hsinchu Hash House Harriers celebrated ole Hallows Eve in fine style this month, raising a few pulses by raising the dead in the Zombie Apocalypse Run. Over forty hashers attended our run at Siangshan TRA station, showing up dressed as the undead.

Hared by Goatf***** and “Just” Courtney, H4 ran through bat infested woods and citrus farms in search of brains to feast on and a cool beverage to quench their bitter thirst.

There was but one brave soul, though gravely outnumbered, studied up on his Zombieland rulebook and came through unscathed. And I think I speak for everyone, Mongayvian, when I say you can leave your high powered Nerf gun, and your “double tap” zombie assassin tactics at home home next run. You left yours truly with a nasty sniper gash to the forehead. 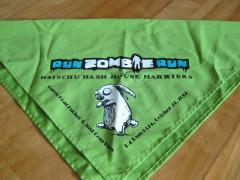 Tricks aside, there were still treats to spread around with a few lucky souls who ended up with H4 beverage koozies for best Zombie costumes and cheers to our lucky winners. And to all in attendance, they went home with stylish H4 “28 Beers Later” Zombie Apocalypse bandanas designed by Sphinctertat. Once again, you have done a wonderful job at making H4 the envy of Taiwan Habdashery.

We would like to remind you all to come out for our next run, November 24th, hared by Bendover B**** and Comes with Kid. Perhaps you can dress up as headless turkeys if you want to continue to festive mood.

The roles are reversed for this October’s reunion run. The trail will be pre-marked and ready for the hashers to take off first to be chased by the zombie hares! Get dressed up and zombiefy yourself! Please wear clothing and footwear that you won’t mind ruining. It will be a messy run so bring that spare bag of clothes and shoes.ZOMBIE BANDANAS!!!
This is a swag grab run! Just show up and it’s yours!

ON A MORE SERIOUS NOTE:
The laws have changed and being caught driving under the influence can result in 2 months jail time. You can’t go hashing when you’re behind bars.

That being said, write “BUS ME” on the event wall to reserve your seat on the party bus! Cost will be between 300-400NTD for the day.You don’t have to take the bus, but we strongly recommend it if you’re going to be drinking. It’s peanuts compared to jail time and deportation.

It’s Thursday evening. Typhoon Tembin is hitting land on the Southeast Coast of Taiwan. As of now, the run is still scheduled for Saturday. HOWEVER, the storm won’t reach Hsinchu County till late morning Friday says the Central Weather Bureau. Stay tuned to This site, or theFacebook Group or Event Page to see updated news regarding Saturday’s run. In the event that it must be rescheduled, the run will take place the following Saturday.

)
“Wow, sunny day. I hope it’s cooler skies over Beipu.” Coolers set, we have two caravans of Hsinchu hashers, the one derived of scooters following flour from meetup to run start and the second derived of those bussing it with China Hash. Here’s me, “scooters, you can’t take the highway, so be on your way, the bus is set to arrive in 15.” Forty-five minutes transpire, ring, ring. “You’re where?”

In due time our pickup shows up and many an adjective were affectionately given to our man of the hour and we were well on our way watching the Olympic opening ceremony and supporting our host nation of apparently China Taipei?!? (Where is THAT on a map?) As they were parading their athletes around the London grounds on Tele.

As the bus arrived in Beipu our stranded, idle hashers were rounded up, particularly Buzzard Eagle, who had been waiting in the rain since 1:30 (note arrival time was 4:00). Cheers to him.

“Just” Jeff and Jizzmopper’s run was exceptional. During the first major obstacle, a tough 2k incline of the 7k run, China Hash’s very own Mini Me was overheard by your kind narrator saying, “when did Hsinchu start running hills?!?” And that was precisely the feeling that was left with at the end of the day. Hsinchu came, we conquered, we represented. A fine run climaxing with a whiskey down down led by Sphinctertat and a circle in the Beipu cold springs, complete with a rope swing. 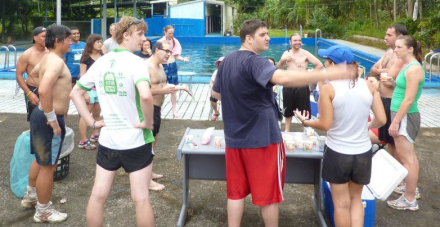 Hash Hush, circling around the pool

(See photos from this run here)

Why driver get out of car at traffic light?’, asked ’70%’, one of our visiting hashers from Japan.
‘He’s the Hare, he’s laying trail!’, I mischievously replied.
‘So many scooters!’ ‘
‘Yes, they will follow the flour to the start of the run.’
These visiting hashers from Japan were serious hashers – they run three times a week! But they had never seen anything like the H4 convoy before!

Of course the driver of the car wasn’t really marking trail to the beginning of the run from his car. His co-passenger was. Gonad Enhancer showed amazing dexterity as she bunny-hopped out at various lights to put flour arrows on the road for straggling scooters. Flour was flung directly from the car on the home straights and it is testimony to the innate good nature of Taiwanese that a smile could still spring from the shock as to why a stranger would throw white powder at them from a passing car!

Our international hashing family, 70% and Rap Unzel sing a song and drink it out, literally, out of their new Hsinchu Hasher shoes.

22 sweaty souls braved the 37oC heat on this sweltering Saturday and the Hares, ‘3 Dogs Frolicking’, ‘Sir Galahad’ and ‘Comes with Child’ had prepared suitable summer short and medium length runs. The going was slow as in addition to the swelter, there were sun-worshipping snakes on this trail that we did not want to step on and awaken from their slumber.
The short run was a leisurely stroll through step-free trails in the beautiful FeifengShan environs. The medium run had an additional hill shalom with rope kindly provided, and a refreshing skip along a stream in the shade. The lack of checkmarks made this an ideal runner’s run and Rapunzel, another of those visiting hashers from Japan did the un-Japanese thing and caught the host hares. However it was done with such joie de vivre at participating in a truly pleasant, scenic H4 run, that the hares did not feel duly put out.

Indeed as those that know the true H4 soul, the real race begins when the run is over. The festive frenzy began with frolicking in the swimming pool, followed by the down-downs. Gonad Enhancer went head-to-head with Heidi from Down Under over a T-shirt kindly provided by the visiting hashers. This dominoed into additional beer swilling contests over other hash paraphernalia, bits of rope etc., a song or two and a farewell to Vicious Bitch who is heading off to China in search of lonely pandas.

The resort owner got cold feet over the planned barbeque for this herd of heated hashers, so after an initial fevered search for ‘3 Dogs Frolicking’s’ car keys (later rescued from his car at 3AM) and Siberia doing the wheelies on his scooter, we all stampeded off to what I think was a restaurant where I’m sure we all had a wonderful time.
Hopefully the mental strain of shepherding H4ers around once a month will not prove too much for our new young GM, “Even Hitler doesn’t like him’ (or just ‘Hitler’ for short) as his new reign began properly! Thank you.

Thanks also to others who work tirelessly behind the scenes and especially the Beer Master for keeping the H4 machine well-oiled! Incredibly, there is still oil left over that can be enjoyed this Wednesday night, July 4th (!) for those willing and able at our new meeting place:

AIR Without The Puff Run

What, what what??? Short & long runs, swimming pool and barbeque!!! 短期和長期的步道，游泳池和燒烤!!!

If you can’t make the meetup, but want to run (google map)

Well kind of… According to a new study from Glasgow University, jogging in nature  as opposed to indoors will diminish the chances of mild mental illness by half.

Researchers found that anything from a stroll in the park to a run through woodland can have a positive effect on people suffering from depression and anxiety.

The study also showed that the positive effect on people’s mental health was 50 per cent more than they might expect from going to the gym.

The researchers at Glasgow University looked at natural and non-natural environments for physical activity, including walking, running and cycling, and found that being around trees and grass lowered brain stress levels.

So whether you’re a walker, jogger, or runner, hashing will lead you to a more balanced state of mind. I mean does this look like people suffering from mental illness? Surely not.

Lone Scrotum gives an emotional farewell to all those hashers he’s met during his time in Taiwan. He’s sure to miss you all as you can clearly tell.

The 2012 All Island Run marked the last run (for a while) for our former GM, Lone Scrotum. Scrotum was in charge of the Hsinchu HHH Mismanagement (as it’s referred as) over the past four years and was responsible for many a fine trail during his time. A many of many hats, he was quite involved as GM and well regarded by most. We wish you well, Lone Scrotum, and hope to see you soon.

Don’t worry Lone Scrotum, I’m sure they were wrapping it up to protect it from this island humidity, like they do with the individual sneakers in the shops 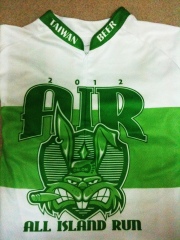 What a weekend! AIR 2012, hosted by your dear hashing friends from the Taichung HHH and Taiwan Beer. The weather forecast was dismal, but we had our very own Religious Advisor light a candle vigil to keep our trails well marked, our foresight clear, and those complaining hashers away. It turns out, our religious advisor did us a solid and the hashing gods brought us a very solid day out with our hashing kin.

Taichung brought us 3 solid runs and our Hsinchu hashing crew came out to represent us well. The long run on the day was a 15k up and down 4 mountain peeks through some mucky obstacles and narrow cliffs due to the light showers and electrical storms, which provided a well earned cooling effect on the bloody uphill climbs. Thankfully those fine people at Taiwan Beer had a duly deserved beer check at the crossroads of the long and medium. Cheers to that.

One vividly memorable obstacle on the day were the few declines through mellon fields–you know the ones set up like grape fields where you have wiring held up slightly overhead to keep the mellon or grape vines growing off the ground. Well, those 5lb. melons served as American Gladiator style flails, swinging right at head level for your taller runners, such as your kind narrator. But luckily there were no casualties on the day, once again thanks to the kind blessings of our religious advisor. But on the day we must truly remember to send out a great sense of gratitude to two people in particular. The first of which is our very own hash cash, who has gone to such overwhelming feats in keeping HHHH well organized and truly represented and we hope ankle is feeling well. Big hugs go out to Sphincter Tat.

Thank you tremendously for helping us make this a wonderful AIR! We are all very grateful. Secondly, this was the last run for our longstanding, former GM, L.S. We wish you safe travels as you head back stateside tonight. We will miss you dearly and look forward to the day we see your sorry hash once again. Best of Luck and our warmest regards to you and your loved ones your going back to be with. Much love brother! So till next time. On, On, I say to you, Hsinchu Hashers! On, On! -Even Hitler Likes Him, Hsinchu HHH GM